To my husband, Mickey Mouse is French 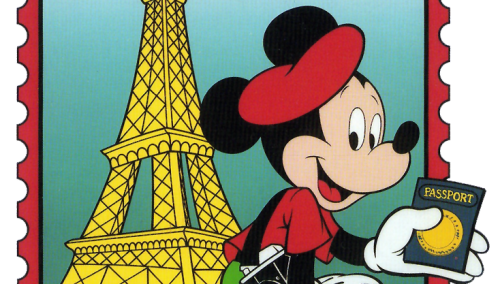 Okay fine, we all knew Belle speaks French (Bonjour!), but it is a bit jarring at first to hear Mickey, Captain Hook and Wendy from Peter Pan en française when you go to Disneyland Paris.

It was after visiting “Le Happiest Place on Earth” I asked my husband this ridiculous question:

“Uhhhh, what are you talking about? No, to them Mickey Mouse speaks French.”

At that moment I realized my husband grew up thinking Mickey Mouse was a French citizen. Not an American who natively spoke English and just happened to be speaking French for him as a favor. He told me that when Disneyland Paris opened it only reaffirmed this belief.

This got me feeling territorial, as if Mickey belonged to me more since I was born in the United States, just like the cartoon mouse. How dare my husband, as a five-year-old French boy think Mickey Mouse, American icon, spoke French! The nerve.

Why weren’t French parents explaining that Mickey was a gift to them from America? Didn’t they notice half the characters at Disneyland Paris were speaking English? Just because you slap a béret and a striped shirt on a mouse, that alone does not make him French.

But of course French kids think this, just as children all over the world think Mickey and his friends speak their language and are from their country. It’s a great thing. Mickey now belongs to the world. But to me as an American, Mickey and Disney are one of the most universal parts of growing up in the United States, and it took a few minutes of mental gymnastics to realize Disney doesn’t belong to my American childhood any extra amount just because he was realized in California.

Disney is actually a great bridge across French and American (and many other) cultures. The Lion King soundtrack in French is amazingly entertaining, as is hearing my husband sing the same Disney songs I grew up with, but in his native tongue. I’ve been trying for five years to get him to sing “A Whole New World” (or “Ce rêve bleu” — this blue dream) as a duet with me singing the Jasmine part in English and him being Aladdin in French. So far he has eluded me, but I haven’t forgotten. It will happen.

However after some discussion, it has been determined my own children will of course watch Disney films in the “version originale” because we all know Sleeping Beauty, Donald Duck, Scar and Elsa really speak English. 😉

Filed Under: love / l'amour
Tags: amour, disneyland paris, france, french, french language, love, love in french, paris
Love like the French, even if you’re not married to one

1 thought on “To my husband, Mickey Mouse is French”