It’s been an emotional six-weeks full of events that led me to evaluate where I belong in the world and where my heart lives. Getting a job, going back to America and having bad things happen to people I love who are far away.

Six months in, my Paris life is becoming more complete and I am reconciling that my life in America doesn’t — and may never again — exist in the same way. And that’s okay. 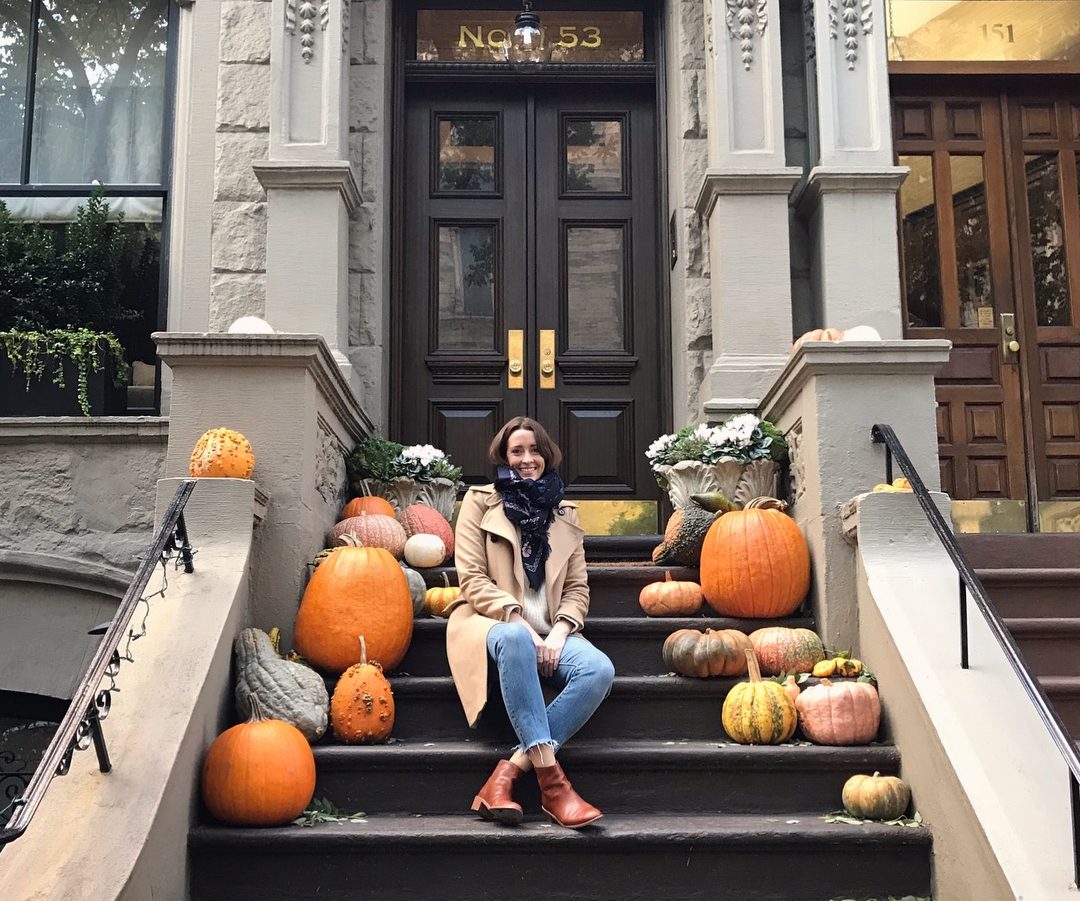 I was nervous to go back for the first time. Would I feel sad? Would I regret leaving? I wanted to enjoy the trip, but not so much that I questioned whether Paris is the place for me right now. In the end it was melancholic.

New York is much more familiar to me than Paris, and I arguably still have a more established life of family, friends and professional connections in the city. There was even a bizarre moment when I clicked into autopilot in my old neighborhood and momentarily forget I had moved at all.

But as I walked the sidewalks so familiar from 12 years of life, I felt pulled between two worlds. My mind knew that I don’t belong there anymore, even if it is the place where I became who I am. I may not have quite established myself yet, but I am confident Paris is my future and New York City is now my past — as sad as that feels to say. 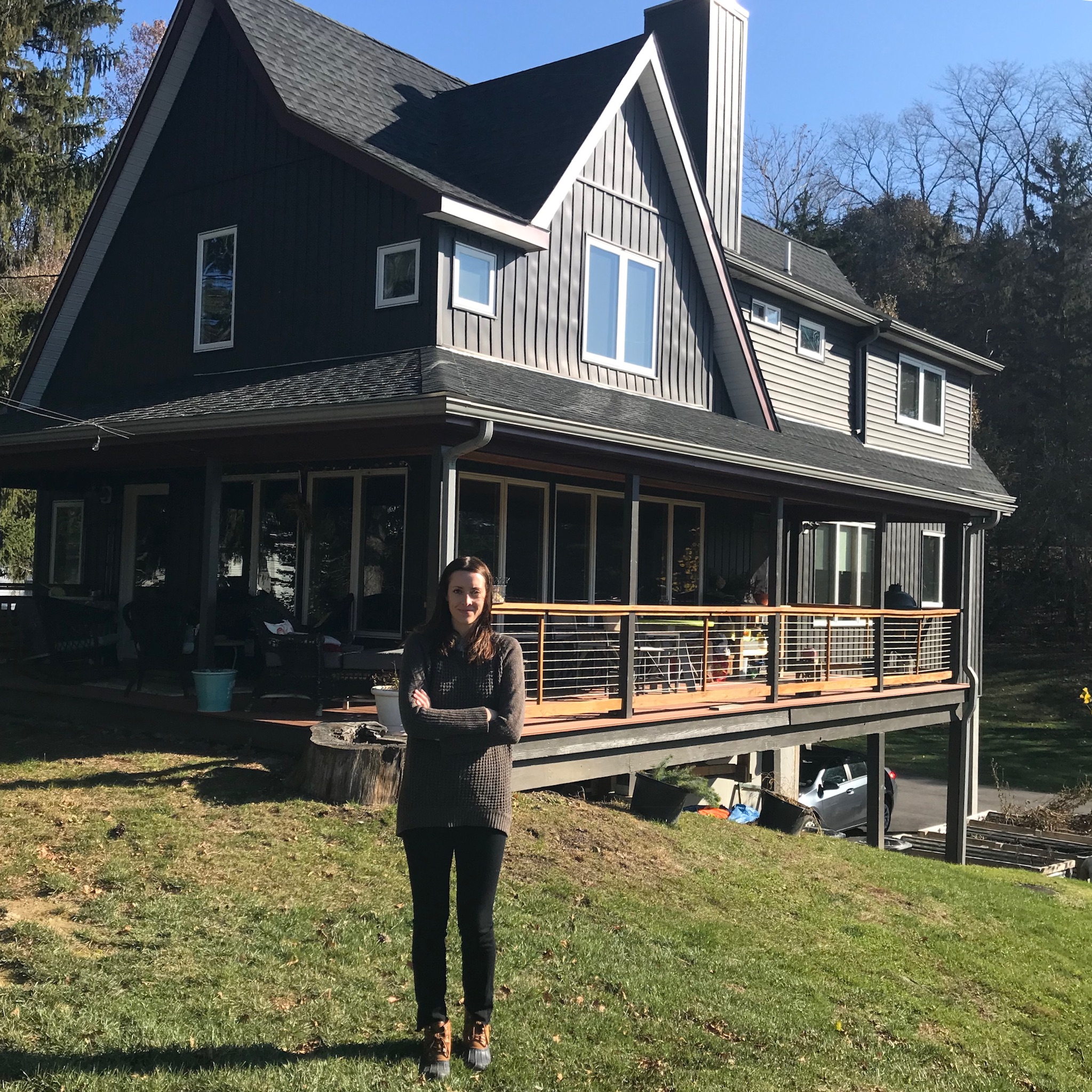 The nine days were over in a blink. A blur of old friends, favorite only-in-New-York spots, and eating until discomfort. My family rented a house north of NYC for Thanksgiving so we could have space to all be together instead of spread out across different apartments in the city.

America felt like an old, familiar friend you don’t have to put on any airs for, but who you may not completely relate with anymore. I could speak my own language in public, find hot apple cider to drink and the Christmas movies on TV weren’t dubbed. It was total comfort…but you know how I feel about the comfort zone. While I may not have felt the pull of regret that my life isn’t there anymore, I did cry seeing New York City disappear from the plane window. 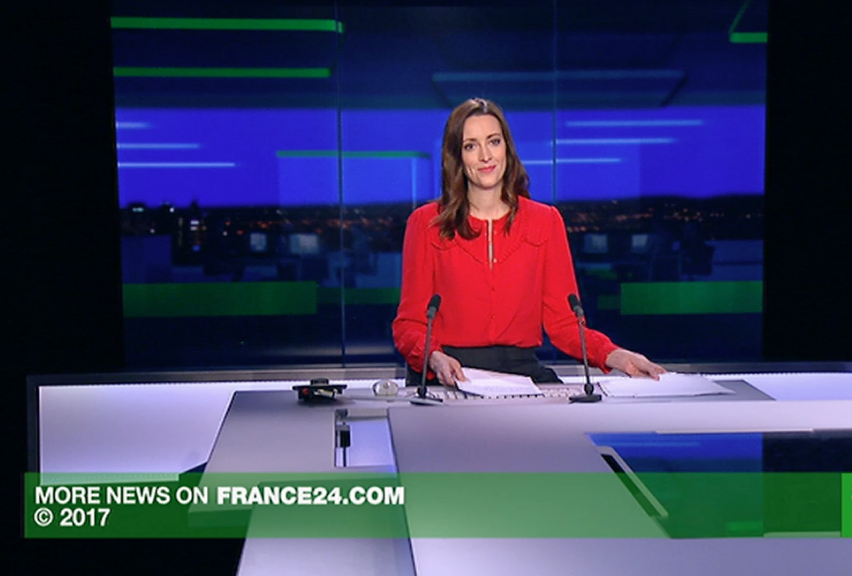 Guys, somehow it happened. A French company gave me a job! It’s funny, the day after I posted my last Dispatch bitching about how long the job-hunting process was taking, France 24 called me back for a final interview later that week. I got an offer the same day as the interview, and started training the next week.

For those unfamiliar, France 24 is a news broadcaster based in Paris that has 24-hour channels in French, English, Arabic and Spanish. I’ll be anchoring, reporting and producing news reports (all in English).

After getting the offer, I was overcome with a feeling that the Paris move was now, truly real. I had an actual responsibility in France. I couldn’t just pack my suitcase and fly back as if the last five months were a big experiment. It felt both grounding and terrifying. 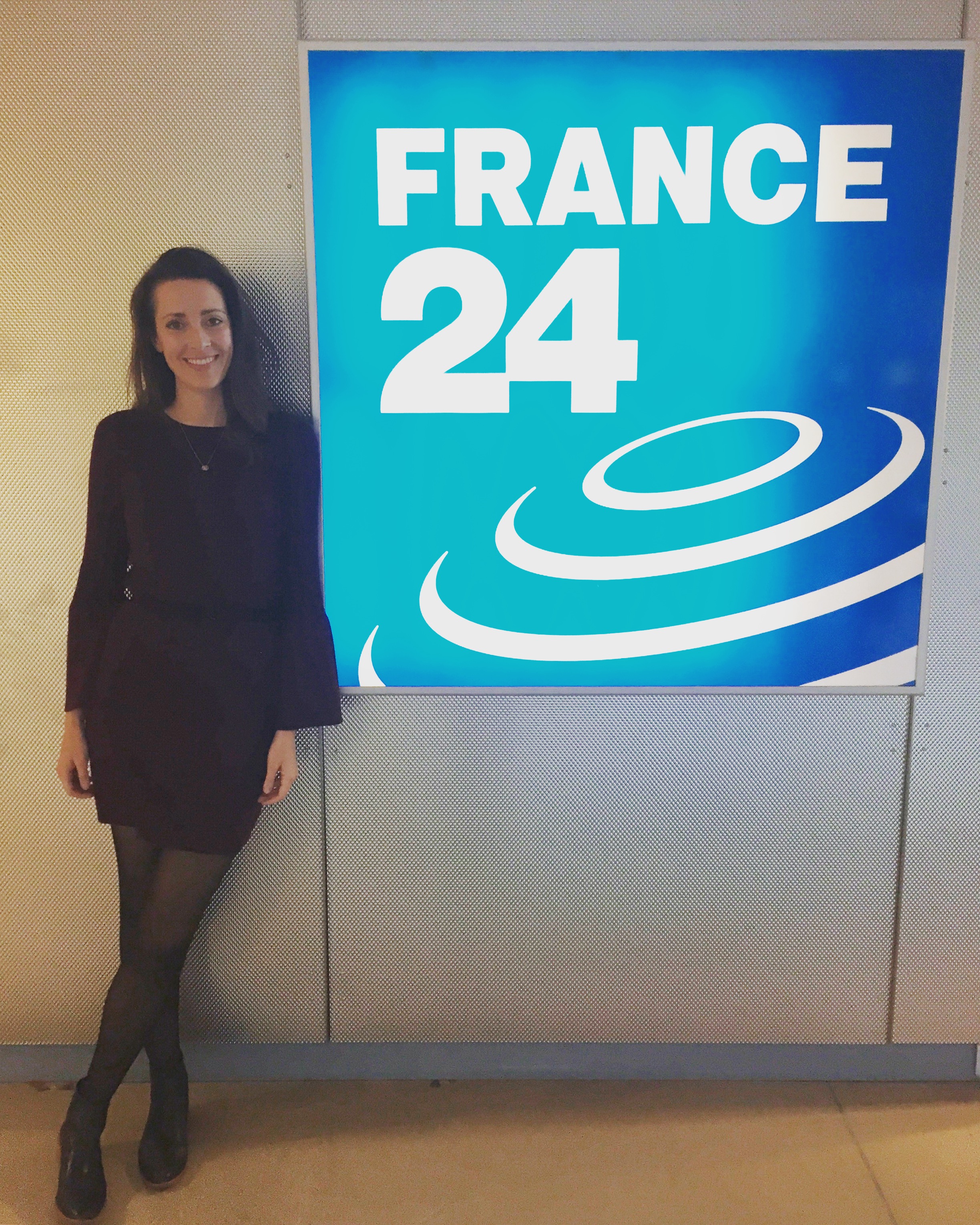 I am thrilled to be working again, and lucky to be able to continue in a field I love. It has also been a constant challenge to work in a newsroom where French is the default language. My work is in English, but all the journalists across the French, English and Arabic networks share the same space. This being France and all, most of the meetings, support teams, the cafeteria and other aspects operate in French. It is also endlessly entertaining to discover the cultural differences between American and French workplaces — foie gras and wine in the company cafeteria anyone? — and I’ll be writing more about that in another post.

I’m still training for a number of positions, and have been too nervous to share when I’m on air with everyone quite yet. But if you’d like to soon find out when I’m going to be anchoring, follow me on Twitter! You can watch France 24 online or some parts of America also have the network on cable.

It’s time for another round of Wins and Losses — where I reveal my little victories and failures since the last Dispatch.

Win: Got myself a Navigo card

A Navigo card is like an unlimited NYC metro card that also works for all the commuter trains as well (Paris equivalents of the LIRR, NJ Transit, etc.). It is of course much more annoying to get because the French bureaucracy involves submitting an application and photo and waiting three weeks– but once you have it you are liberated from the Paris metro’s tiny little paper tickets and let me tell you it is great. I feel like a real Parisian now, and recommend getting one quickly after moving here.

It’s one of the things you don’t spend a lot of time thinking about when you’re packing to move abroad: computer keyboards aren’t the same in other countries. Which makes total sense when you actually think about why the English keyboard is laid out the way it is.

Before I started working I pretty much only typed on my personal laptop with an English layout. But once I started working at a French company, typing became a daily battle. Now I’m constantly swapping Q’s for A’s and typing commas when I want an M. Figuring out how to make an @ involved minutes of hunting and pecking before turning to Google. FYI: It’s “Alt Gr” (whatever that means) and “0.”

I failed to realize my fingers would have a language barrier to overcome just like my brain. They still need some time to adjust — and can anyone tell me what is that double S looking symbol on the lower right?!

What they say is true. There is no better way to learn how to do something than being forced to do so in the real world. Whenever I see the number for my work schedulers pop up on my phone, I immediately start panicking — oh merde I have to speak French on the phone. (Not seeing someone’s face makes it harder to understand them).

It may not always be pretty, but amazingly the person on the other line understands me, and there have been no major issues. I still freak out in my head, but I’m able to hold my own on the telephone in French and this is a major step forward that I only took because I was forced to.

Loss: Let me eat when I want!

One of my favorite things about living in NYC was around-the-clock availability of food. Pierogis at 3am? No problem. In Paris this is not the case at all. If you are hungry between “normal” lunch and dinner hours, tant pis pour toi (too bad for you). Cut to me at 4:30pm on a Tuesday running between four different Japanese restaurants before finding one that is actually serving food. In Paris you must adjust your schedule around societal norms, unlike NYC where the city is built for 24-hour access. I’m still trying to get my stomach to accept this.

While France may lack the autumn spirit we feel in America, once Christmas nears Paris explodes with cuteness. Paris is already a beautiful city but add twinkling lights, decorated trees and mulled wine and it is almost too much to handle. 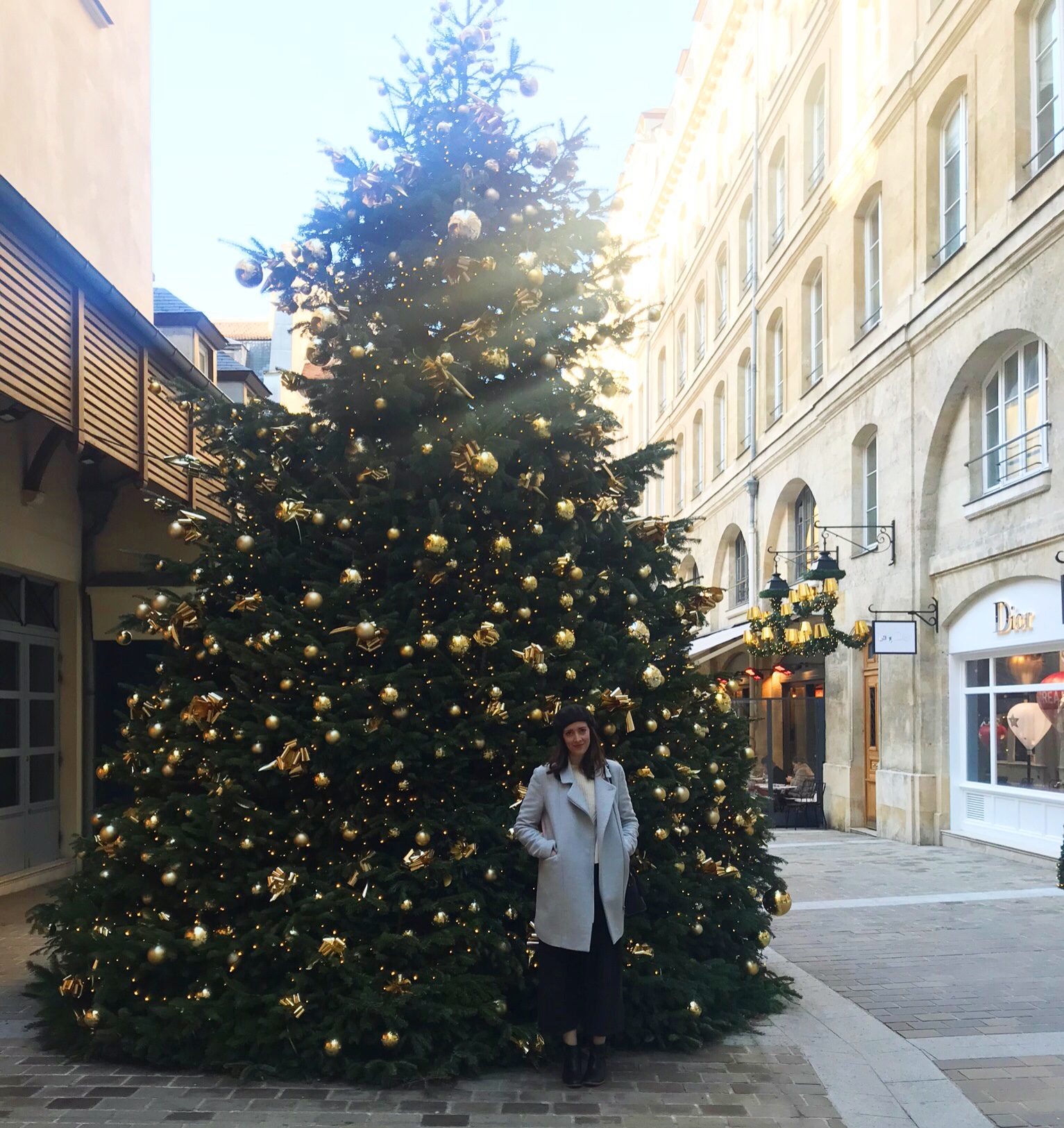 I had been putting in a lot of hours at work and not getting out much, so on my most recent day off my husband and I decided to go hunting for Christmas spirit. We went to look at the window displays of the big department stores Galleries Lafayette and Printemps, walked around the Madeline area to see the city decor and ate a mini Bûche de Noël (French yule log Christmas cake) to get into the holiday mood. If you are in Paris around Christmastime, you must go see the tree at Galleries Lafayette in the cupola room, it truly is magical.

Last week, my family sadly learned that my parents’ home was engulfed and destroyed by the wildfires in California. They were out of town when it happened which means thankfully they are unharmed, but unfortunately they also weren’t there to save anything. All the family heirlooms and baby books are gone forever.

It is a terrible tragedy you never expect to happen to your family. It also made me more conscious of how far away I am. I could set up a GoFundMe page to raise money to help them, but I wasn’t able to be with them on the other side of the world. I understood when we moved here that it would be hard for me to be there for every birthday, new baby and wedding celebration, but this was the first event that made me feel the distance acutely.

I’ll be closing out 2017 in Paris, and what a year this was to reflect on. I wish you all Happy Holidays and Happy New Year! I’ll have the next Dispatch in 2018 and will do a retrospective on what I’ve learned in France so far.

Until next time mes amis, xoxo

NEW: Am I French Yet? now has a Facebook page you can follow for updates and fun articles about France!