Are French people all eating snails in their striped shirts while smoking? Well…oui and non. Every country has its stereotypes and France probably has more than its fair share. Let’s examine some of the most common clichés about French people. 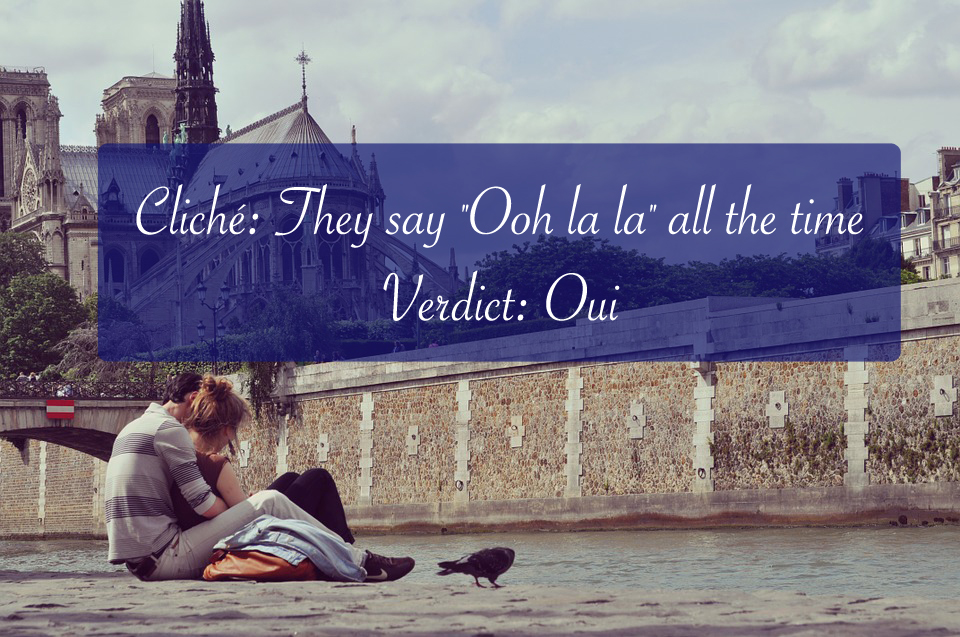 It’s true that “ooh la la” is interjected into daily conversations and on TV regularly in France. But not in the way you may think!

“Ooh la la” isn’t used by French people to express desire or sexiness the way Americans say it. In general, it is interjected when they are shocked or impressed.

For example: “I went to the store and, ooh la la, the line was an hour long!” Or when an amazing soccer goal is made, you’ll hear “ooh la la!” in place of how Americans would say “wow” or “whoa!” 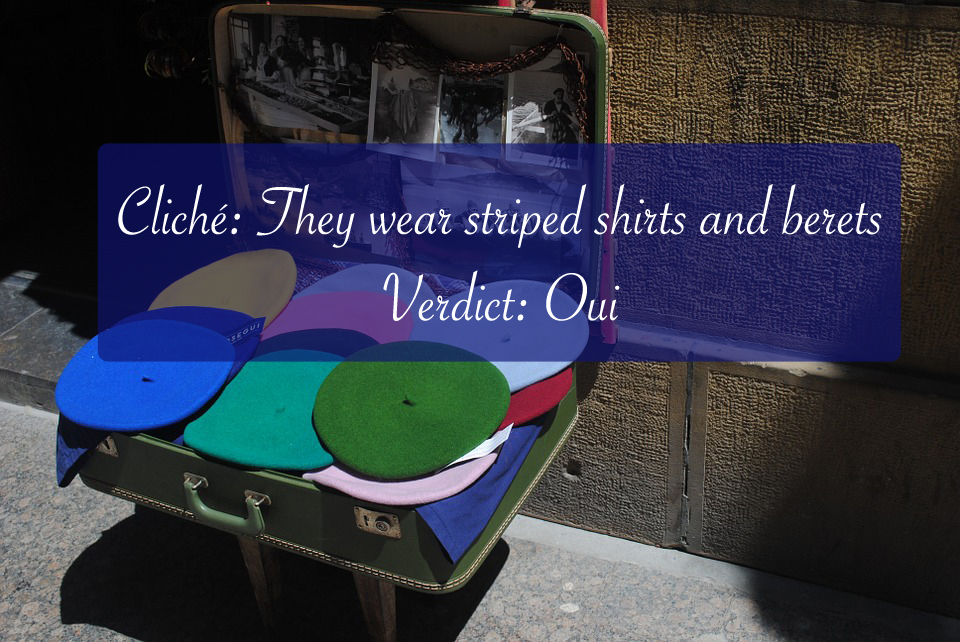 Striped shirts are an everyday item of clothing here. Everyone from senior citizens to babies wear the classic marinière. Stripes became the uniform of the French Navy in the 1850s, but were popularized to the masses when stars like Brigitte Bardot began wearing them as leisurewear. Want to own the most authentic version? Buy the Saint James classic Breton.

Berets are less common, but seem to be more popular than usual this fashion season thanks to Dior and its leather version. Berets are worn by locals and tourists alike here in Paris, so no one immediately assumes you are a tourist if you’re wearing one.

I’m not French, but I own both of these items and wear them unironically around Paris. Not at the same time, though I have seen actual French people doing just that, probably unaware they are a walking cliché. 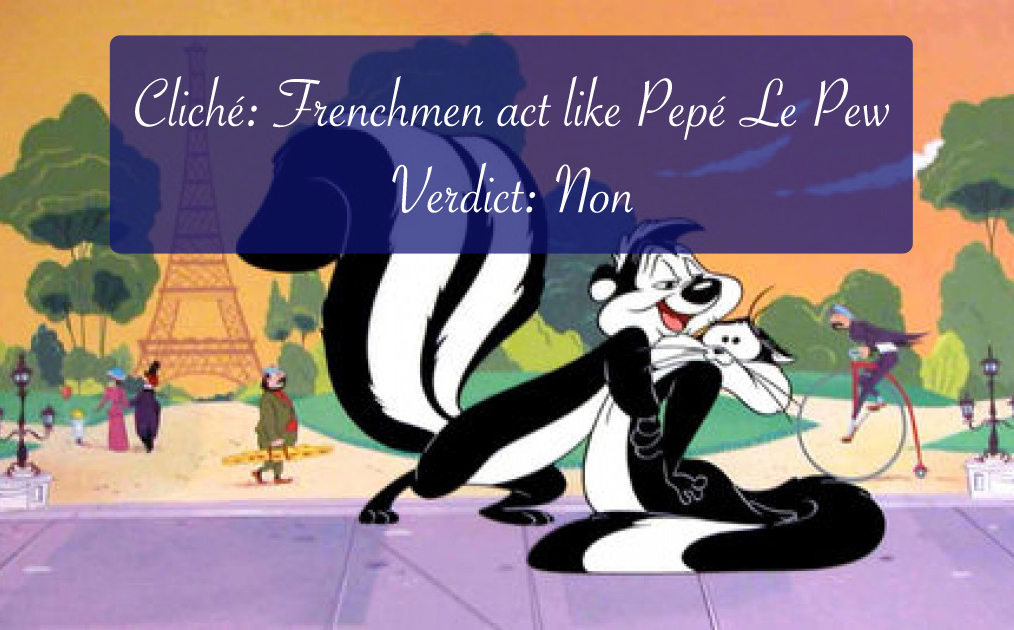 First off, they don’t know who Pepé Le Pew is. I’ve shown many French guys a video of Pepé Le Pew and tried to explain this American cliché of a Frenchman. Unsurprisingly, they don’t see the humor in being portrayed as a smelly skunk with a bad French accent going around groping all day.

As far as the Casanova rumors– Frenchmen may have a slightly more romantic streak than their American counterparts, and tend to get serious about relationships faster too. But despite Paris’s well deserved reputation for being a romantic city, everyone isn’t making out on the street all day. 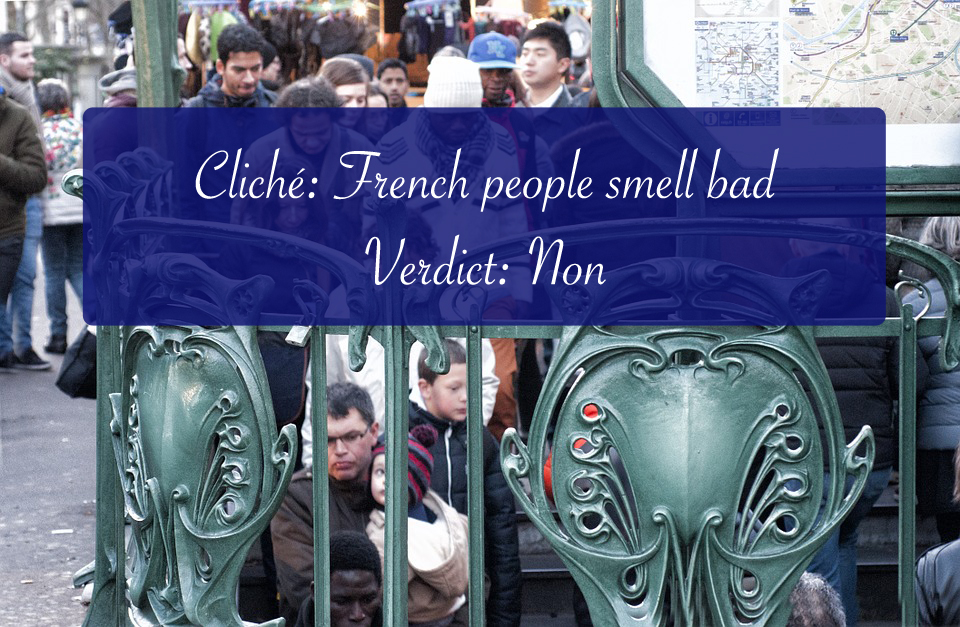 Considering France produces some of the world’s finest perfumes, cosmetics and soaps it seems a bit counter-intuitive that they would stink. I mean, the Paris metro in summer is not the freshest smelling place, but it is no worse than the subway in NYC.

Perhaps this rumor continues to live because European Union regulations don’t allow the some of the same chemicals in their products we find in America. But this cliché (also perpetuated by Pepé Le Pew) is not true. I can personally confirm that French hygiene, in general, is great. 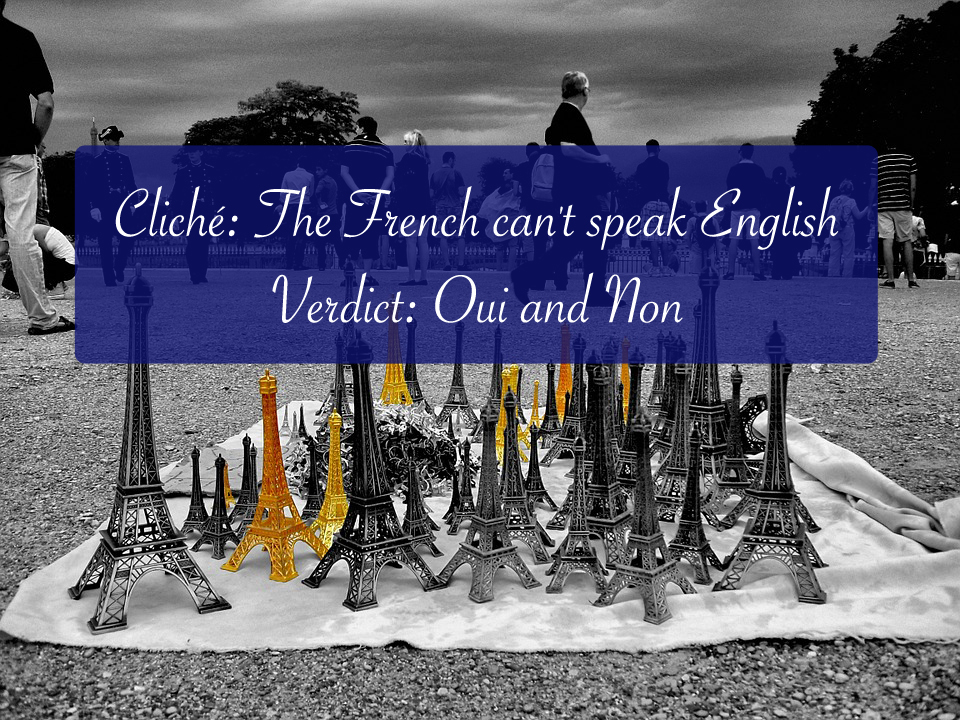 English is the most spoken second language in France, as it is in most of Europe. But you will find a generational and geographical divide, so the answer very much depends where you are in France.

The tourism industry in France operates largely in English, therefore you will find more speakers in cities such as Paris and Bordeaux than in the countryside. Younger people are also more likely to speak English than their parents.

France is no where near the 80-90% English speaking rates found in Scandinavian countries, but the World Economic Forum says France has a “moderate” English proficiency level compared with the rest of the globe. 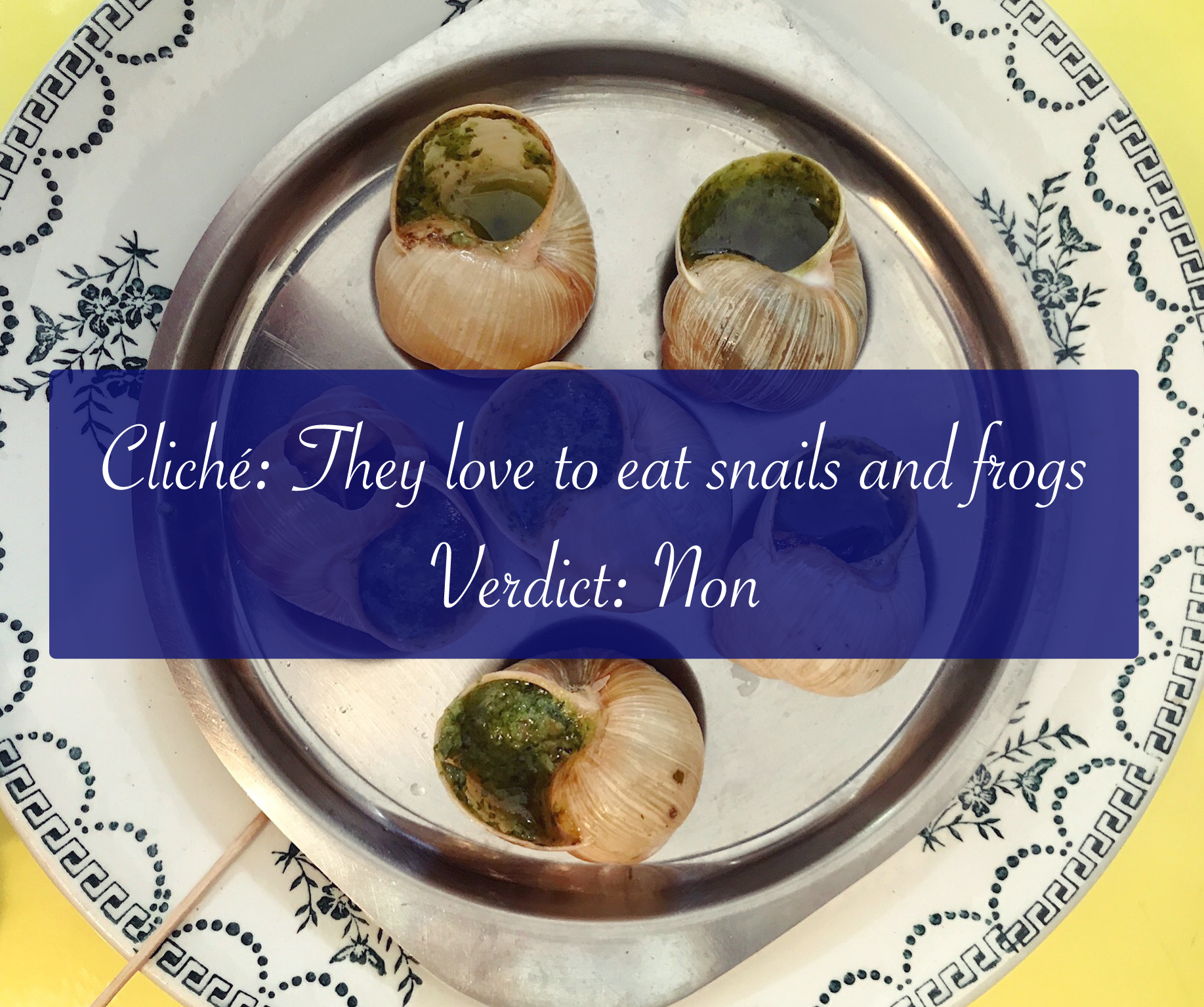 Snails (escargot) are most commonly on the menu in the Burgundy region of France, where the best originate. You can find snails in the grocery store, as well as on some brasserie menus, but I’ve never personally seen a French person order snails unless they are in the company of a tourist. Of course there are French people who enjoy a plate of snails, but it isn’t an everyday dish.

As for frogs– I’ve never eaten frogs legs in France, and I don’t know any French people who profess to love eating frog. As with many French foods, frogs are more common in a specific region (Dombes) than anywhere else. France has even outlawed commercial frog hunting since the 1980s, so that frog leg you’re eating in Paris most likely came from Indonesia. Despite the nickname, France is not the land of frogs. 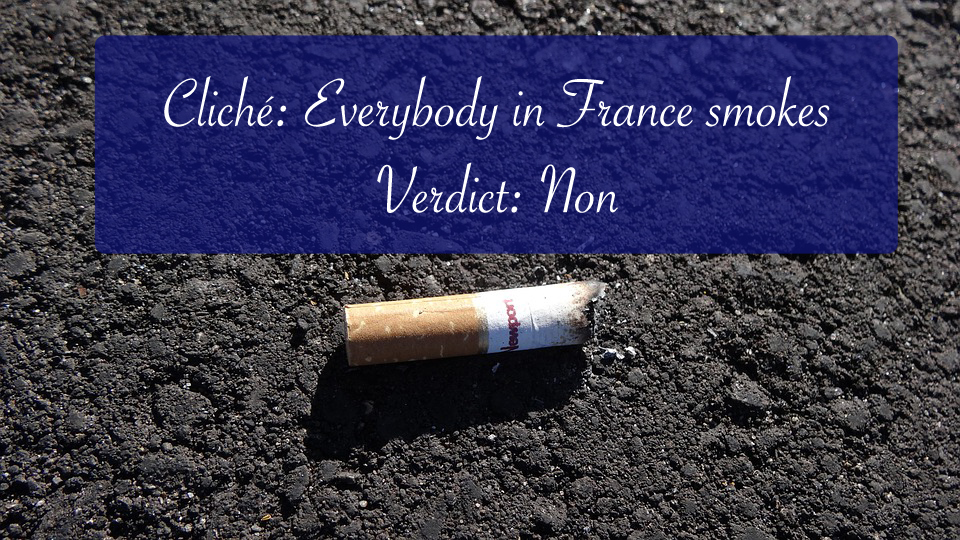 Smoking rates in France have actually plummeted almost 60% since the 1960s, and today fewer than one-in-three Frenchies smokes regularly. This is quite a bit higher than U.S. rates (around 15%), but it is about average for the European Union.

While you can’t smoke inside restaurants or bars anymore in France, you will find French people lighting up on cafe terraces, in the street or at a park bench. So perhaps the public aspect of smoking in France is why this cliche persists. 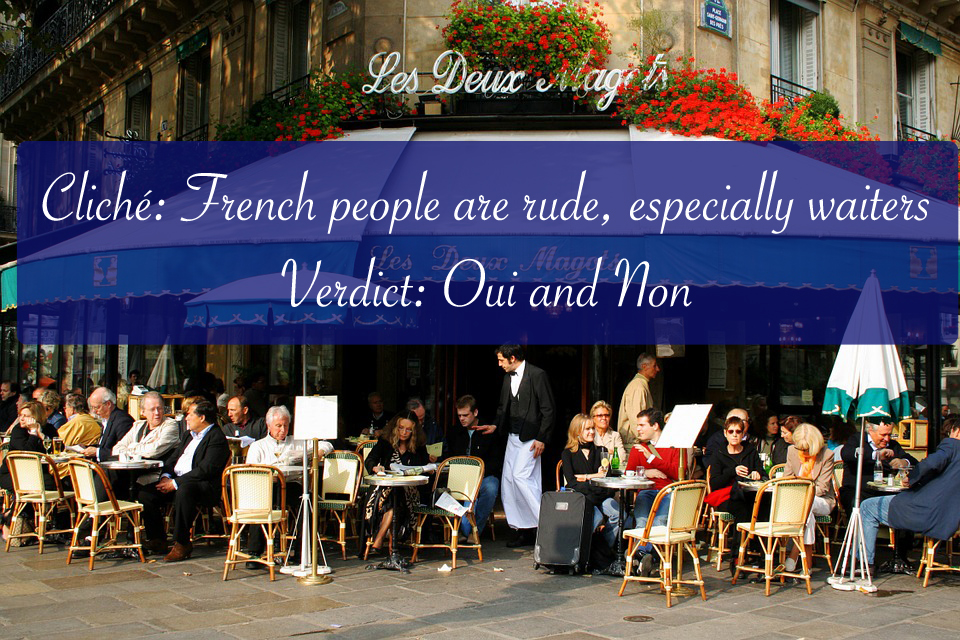 The French are more private than Americans and don’t generally strike up conversations with strangers. It is a different culture, and some tourists take the lack of overt friendliness as a sign of rudeness, though most French people don’t mean it that way.

Also, remember Paris isn’t Disneyland– people are living their real lives and don’t always have time or patience for the constant stream of tourists. I had this same feeling living in NYC periodically — sometimes you are having a rough day and just can’t give directions to Times Square one more time.

As far as waiters, French servers don’t work for tips, so it is true they may not all be as overly friendly and attentive as you’re used to in the States. However, waiters at high-end restaurants take their jobs very seriously and you will find the service to be world class.

Have you run into any French cliches that you found to be true or false? Leave a comment and share!

*P.S. Thanks to my friend Gabriella for suggesting this post topic <3